Back in May, I wrote a post titled “What Makes a Runner?” in which I mentioned how I quit my college running club after two years of heavy involvement.  Long story short, there were many things that compounded into it not being healthy for me to remain an active member of the club.  I stopped going to practices, removed myself from the email list and Facebook group, and unfriended some of the members on Facebook.  I am significantly happier now.  However, there is one part of the club that I haven’t been able to let go.  Two, if you count how I like racing in the singlets. 😛

The club has a Google document.  “The doc” as it is affectionately called.  One for men and one for women.  Members use it to track their training.  It’s really very simple–there is a collective homepage with people’s names and total mileage from the current training period (e.g. summer), and each runner has her own page on the doc to track her training.  People like to customize it however they want and it can get very silly, which is part of the fun.

I still have a page on the doc.  I like to post my training there.  I like how it is an at-a-glance view of several weeks at once.  I like looking at other people’s training, although I avoid some tabs because I know that reading certain people’s pages will make me angry, annoyed, upset, or jealous. 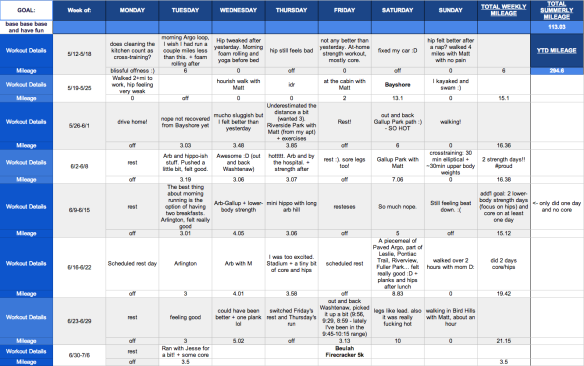 My page through this week!

I have thought before about the possibility of simply maintaining my own doc.  I could have the same structure for my page and I could reset it whenever I wanted, instead of on the scheduled reset dates of the club doc.  However, there is something about the community aspect that keeps me on the club doc, even if that is not a community I necessarily want to be a part of offline anymore.  I do still have a few friends in the club and I like to see their training and imagine they might be looking at mine, as well (my roommate does!).  Something about looking at other people’s training logs is fun for me.  Maybe it’s motivating, maybe just interesting, I can’t be sure.  Of course there are sites like Daily Mile, but something about this doc is different.

I think if I were a part of the exact same doc idea with, say, blog friends instead of runners from the club, I would quit the club doc.  For now though, I just don’t want to.  It might be weird when the new school year starts and freshmen get on the doc who have no idea who I am, but I will cross that bridge when I get there.  And hey, I was on the board last year and still didn’t know who some of the people on the Google doc were.  So, whatever. 🙂

This weekend I am going up north for 4th of July weekend and will be running a Firecracker 5k on the 4th!  I’m very excited, even though I am expecting a slow time (27:XX would be GOOD for me right now).  It will be fun to push myself and run in a new place, plus this is only my second race of the YEAR.  Expect a race recap sometime soon after!